Well, I can safely say that we did not go hungry while in Austin. I don’t even recall feeling any sort of hunger pains at any point during our trip, which usually happens to me on vacation when I can’t constantly snack. Vegetarian, tex mex, burgers, pork belly, hum bows….you name it, we probably ate it that week. I was sort of relieved to come home and detox a bit. I think at one point, I noticed that I had ordered an entree with pork belly every night for the first few nights. When in Rome, I guess……

Beside our infamous trip to Franklin BBQ, we visited many other food trucks and establishments, all of which were extremely good. Austin has a killer food truck community and you can find them paired up all over the parking lots of Austin. We only ate at a few, but if I find myself back in Austin again, I will def want to hit more of these up! And remember kids, it’s always BYOB!

Places we chowed down at included:

Elizabeth Street Cafe – pricier French/Vietnamese restaurant with yummy, booze punches that are good for sharing
Torchy’s Tacos – a famous taco truck with locations all over the city – their deep fried avocado tacos are a must
Hopdoddy Burger Bar – an inexpensive but all natural burger joint with a weird way of getting your food (you wait in line, order a drink, wait in line some more, order your burger, then they seat you) everything is organic/local/made to order
East Side King – a food truck run by Top Chef winner Paul Qui, located in the back lot of a bar featuring all sorts of goodies including beet fries, Brussels sprout salad, beef tongue and pork belly humbows – just order 1 of everything off of their menu and you won’t be disappointed
Austin Java – a good breakfast joint near Zilker Park with lots of veg/vegan options
Chuy’s – famous tex mex place with that kitchy diner feel on the inside but OMG, cheap margaritas and queso? sign me up.

I decided that my journey to Franklin BBQ was so important that it warranted it’s own post. Not only was this the highlight of my trip, but it happened to be the BEST meal I ate while in Austin. I’d even put it on my list of the top 3 meals I’ve ever consumed in my lifetime – it was just.that.good.

After seeing Anthony Bourdain’s episode on Austin, I knew I had to hit up Franklin. Why, do you ask? Because he is my “older man crush” and anything he recommends has to be good. During his segment on Franklin BBQ, he mentioned that people wait up to 3 hours in line for this meaty goodness. Yikes – waiting for food is not exactly my cup-o-tea, but I was willing to give it a shot. I had even toyed with the idea of even getting off the plane and heading straight to the line, but that was quickly nixed by my fellow travelers and hosts and we ended up at a vegetarian breakfast joint instead. A bit on the opposite end of the spectrum, but whatevs.

Word on the street is that you need to be there by 9am in order to not get the slim pickings so I kept Franklin in my back pocket, bringing it up every day until finally it was decided that Friday was going to be the day, the glorious day of meat! Locals told us were were nuts to get up early to wait that long in line especially with the influx of ACL attendees in town. But I was determined and way too jazzed to have that deter me and promptly set my alarm clock for a bright and early 8am then went out and partied for the evening.

So……8am really didn’t happen, it ended up being more like 9am plus waiting around for everyone to get moving so by the time we got there it was 10am. I was worried, I was stressed, I knew there was just no way that we’d have a shot arriving that late. I became very depressed. I might have moped in the back seat of the car a little. But as we turned the corner and Franklin BBQ and all of its turquoise glory stood in front of me, I realized that the line seemed far more manageable than I’d thought. My depression suddenly cleared and I jumped out of the car, a six pack of hard cider in hand, and got our place in line. FYI – BYOBing in Austin is very much encouraged and hard ciders actually make a great morning beverage, just sayin.

I cracked open my first cider and one of the Franklin guys came around to ask us what we were thinking about ordering. I gave him our estimate and he say “no prob” – it was music to my ears!!! The BBQ gods were on our side that day and I was going to experience something major, I just knew it. We settled in for the wait which ended up being 2 hours or so….I think? It got sorta fuzzy in the end after consuming those ciders on an empty stomach.

We finally set foot over the threshold around 11:30am and the end was in sight. I decided that our order must be revised and must now include a bit of everything off the menu plus more of the brisket and pork ribs. I was greedy, hungry and determined not to miss out on the entire experience. The guys left it up to me and I stepped up to the meat counter, full of excitement, and placed my order with the friendly cook who sliced and diced it all right in front of me. Pulled pork, brisket (fatty and burnt ends), smoked turkey, sausage links and ribs became arranged on a tray and topped with fluffy white bread, slaw and beans.

It was like the heavens opened up and angels began to sing. I quickly grabbed our tray and headed outside to enjoy the deliciousness that was to come. What to try first? The burnt ends no doubt. Whoa. I swear, at was a religious experience. Then? The ribs and their peppery, juice goodness. Followed by? Smoked turkey so moist it was ridiculous then sausage links with the perfect ‘snap’. I kept my first round of tastes pure, with no sauces, bread or sides then tackled the second round by making meat sandwiches loaded up with the works. Any way I sliced and diced it, this BBQ was beyond my expectations.

We worked through a good 2/3 of our tray, leaned back, speechless, all knowing that we had the same thoughts running through our heads: I’VE JUST EXPERIENCED THE BEST BBQ EVER. Slowly, the remaining leftovers were packed up and tucked under our arms and we made our way home and spent the rest of the afternoon in blissful couch relaxation watching Dazed and Confused, nach. I may or may have not fallen asleep 🙂 The leftovers were consumed for dinner that night and even cold, outta the box, everything still tasted amazing. Truly a meal and an experience that will never be forgotten. My grandchildren will be hearing about this. 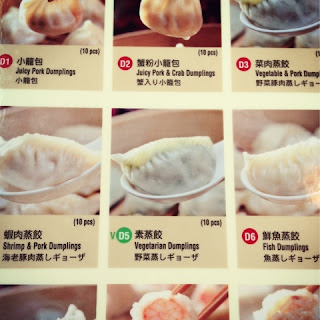 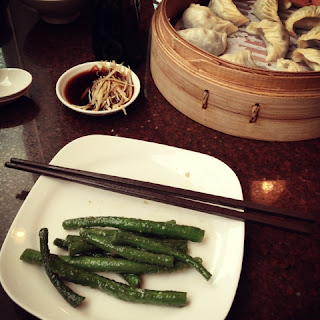 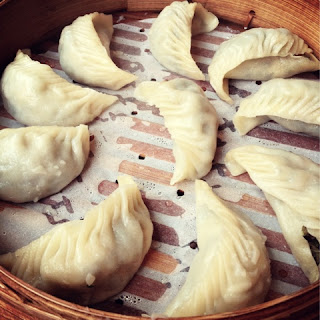 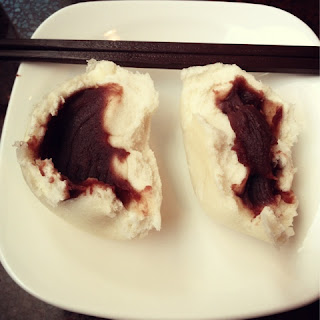 Finally made it to Din Tai Fung over the weekend for their delicious dumplings. We ended up waiting 45 minutes for a table during peak Saturday lunch time (go right when they open to avoid the wait!) but once items started arriving the long, painful wait was soon forgotten. Scrumptious green beans – probably the best I’ve ever had, moist pork dumplings and hello! red bean buns!? I was in 7th heaven. Now I’m fully on the dumpling bandwagon. Any other places worth trying in Seattle? I know there has to be some hidden gems around here!

I haven’t really dabbled in gluten and dairy free baking yet, but when I came across these bad boys, I decided it was time. I had 90% of the ingredients at home AND they are 1 WW point each so it was game on! Granted, they are pretty tiny and popping them into your mouth straight out of the oven is far too easy when they are warm and chocolately….ok so I ate 7 – whatever. This is not the recipe for you if you are looking for that traditional cookie crunch but they are a healthly and tasty option for your sweet tooth! 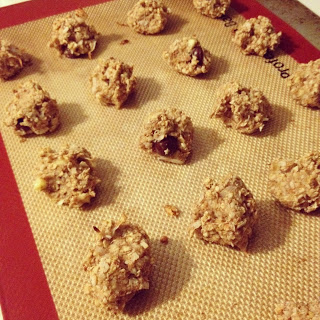 I’ve seen many pins on Pinterest lately about roasting tomatoes so I decided it was time I jumped on the roasting bandwagon. I had picked up two kinds of tomatoes (Romas and Goldens) at the Farmer’s Market last week just for this purpose and was determined to make it happen – I even had it on my “To Do” list!

Sadly, the week went by and there they sat on our counter looking extremely lonely and very ripe. I made up my mind then and there that tonight was the night – these babies are gonna get roasted! Of course I made this decision at 7:30pm not knowing it takes AT LEAST 3.5 hours in my oven. Womp, womp. I’m not a fan of late nights during the week…this girl needs her beauty sleep.

BUT the final product made up for the lack of sleep that night. You guys, they are like nature’s candy! So sweet and delicious! And, um, can I give a shout out to the roasted garlic too? I think I need to double the amount next time since I ate most of it right out of the oven.

I put a batch in olive oil in the fridge for use down the road…I’m thinking some sort of crostini with roasted garlic, tomato and some sort of cheese and put the other batch in some turkey chili I made the other night. Tomato roasting will def happen again in our household, but I’ll be sure to get an earlier start next time.