As of this past Monday, I’m back to officially being a one home homeowner! Thank you Jesus (and Michael Lee, my realtor and Cobalt Mortgage)!!! It still really hasn’t sunken in yet….the process had been such an emotional roller coaster that I tried to shove it deep into the back of my mind so I wouldn’t lose my $hit on a daily basis. I’ve never experienced such intense stress around one single life event – like crippling, physical stress that really trumped everything for a good two months. That ‘ish is not healthy, lemme tell yah.

After all of the madness and chaos around the first “almost” sale, I was pretty skeptical that we’d even be able to unload this thing. The condo itself is in great condition, but there were a myriad of building financial issues that didn’t make loan officers too excited about financing. I gave it about a 5% chance of selling again if we re-listed, but re-list we did and somehow it all worked out. I’m still a bit shocked to say the least.

Within 10 days of re-listing, we got a full price offer with an extremely strong buyer and the closing actually went the way it should. Though I do want to point out that we did have one kind of big hiccup – the appraisal came back way below the sale price so we did have to contest it. In the end, I had to knock off $8k of the sale price, but it is what it is and I still came out ahead. As I was signing the final docs, I did have a little twinge of pissed off-ness for not getting that full amount. I mean, we do have a wedding coming up……that $8k would have been mighty nice. Sigh.

BUT the relief of not having to maintain two properties is pretty maj for this gal, especially with all of the excitement that is going to happen next year. Thinking about the upkeep of not only our fab new home but a condo way over on the Eastside was a total bummer. I’m beyond thrilled that we’re a one house family again. A one house family livin’ it up in Seattle! Who would have thought?!

As a self proclaimed TV junkie, getting rid of cable was a bit of a painful process for me. I liked nothing better after a long day at work than plopping down and watching my fav housewives or a home improvement show. When we purchased our new home, it was agreed upon that we would no longer be slaves to cable (and the $200+ a month bill!) and would become an internet-only household. Fine, fine…..but this gal needed something to watch every now and then so Netflix was quickly purchased! Although it doesn’t have fully updated episodes of most of my fav shows, I’ve enjoyed exploring other new shows that I normally wouldn’t have watched.

Top of my list is Sons of Anarchy. OMGeeee….I can’t get over this show! It is SO FREAKIN GOOD. I was originally drawn to it when I found out that the lead charater, played by Charlie Hunnam, in SoA was also cast as the lead in the 50 Shades of Grey movie. I know, I know…what a lame arse reason to watch a show. But damn, I’m glad I discovered it (and him for that matter. Hot stuff.) Hands down, one of my top shows of all times. Other shows I’ve been enjoying:

Land Girls
Call the Midwife
House of Cards
Orange is the New Black
Documentaries – especially ones about hunger and food insecurities – depressing right?

Problem is, our neighborhood is notorious for S-L-O-W internet. I’m talking the slowest internet possible ie. light surfing is just about as much as it can handle. Trying to stream a show takes mucho patience and even when you get it going, it’ll still stop and buffered 2 or 3 times. First world problems, right???

What are your fav show on Netflix? Do you like to skip around and watch a few of everything or are you a marathon series watcher like the BF (whoops, I mean fiance!) is? 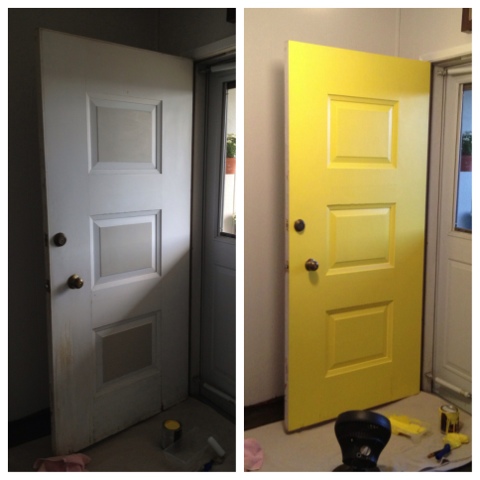 One of the many projects I finished during my week off of work – our front door was begging for a vibrant, fresh color. Since our hizzle is south facing, Feng Shui suggested that it be painted a fire color ie. red, orange or yellow so that the good energy would know where to enter 🙂 Orange was automatically out (sorry orange lovers, it’s just not my thang) so we were left with red and yellow, both of which would have worked fine with the grey exterior and white trim colors. I took a quick friends and family survey and ended up with yellow – Summer Squash to be exact. As you all know, we are a Sonics lovin’ household so anything close to green and/or gold works for us!
I followed in the footsteps of one of my fav DYI blogs, Young House Love, and deglossed, TPCed and sanded it before painting 4 thin, even coats of paint. It was really a day long process so be sure to keep that in mind if you ever decide to paint yours because the door has to be open ALL DAY LONG. I started this project at 3pm and didn’t finish until after 10pm. Luckily, our storm door locks so I didn’t feel too freaked out leaving it open into the evening hours. Speaking of the storm door, I was going to remove it, but as ugly as it is, it’s growing on me. Being able to have screened front and back doors open makes things a bit more bearable when it’s hot outside.
With this paint lookin’ all fresh like, it’s time to jazz up the rest of the front entrance. I’ve got some plans in mind:
Stay tuned….pics of the entire update to come! 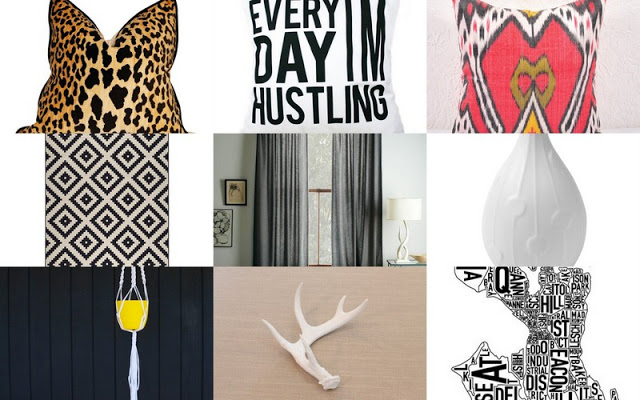 Some inspiration for our living room once the painting is wrapped up and I can switch focus to the truly fun, yet stressful, part – decorating! And I thought picking out paint colors was hard…..I’ve been pinning away these past few months and I’ve noticed that I’ve been gravitating towards 1) black and white, 2) funky pillows and 3) graphic posters. I actually already own the Seattle Neighborhoods poster (how much fun is that!?) and I suspect it’ll become the main inspiration for our new living space.

Our previous living room was mostly blues and greens so this is going to be a big step in the other direction. Definitely more urban and hip and less matchy matchy. I do worry that this ‘style’ doesn’t fully match up with the color scheme going on in the office and craft rooms, which are blue and lavender….am I being redonk? Maybe I’ll just have to funk up the accessories in those rooms OR subtly bring a few of those colors into the living room. Oh the decisions!!!

How do you decorate? Room by room or try and envision the entire house all at once?

Just thought I would fill you guys in with Phase One of the house re-doing/modeling/creating plan. This phase is the easier and ‘cheaper’ of the two and mostly requires paint and sweat labor (thanks family!) After the excitement of purchasing a new home wears off and you begin to feel like you are freakin’ hemorrhaging money, I do find that there are small projects you can complete that make your house start to feel like a home. Refinishing the hardwood floors also came under this phase since it just made sense to complete before moving in (and it was a lovely gift from the ‘rents.)

Obviously, Phase Two will include so more in-depth/hardcore/$$$/work that will have to be tackled down the road in 2-3 years, though only weeks into living here I’m already ready to run out and buy a dishwasher 🙂 Washing by hand SUCKS. I suspect Phase One will be completed by this coming fall no doubt. Then we can take the winter to hunker down before deciding which project needs to be top of the list for Phase Two.

How do you handle home improvement? Do you just rip off the band aid and do it all at once or spread it out over a few years?