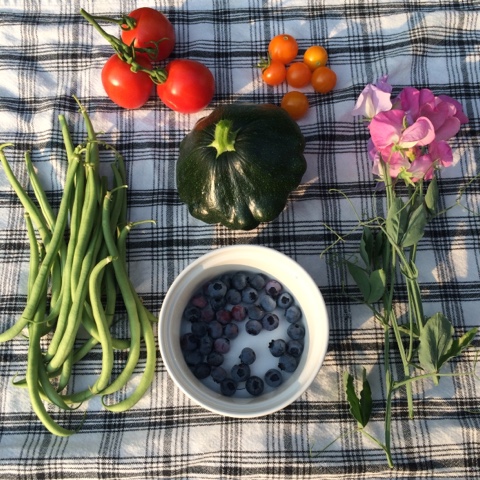 I’d like to think that we’ve hit phase two in yee old garden these days. Ya’ll know just how crazy hot it’s been in Seattle and the garden definitely has responded to those 90+ degree temps (so has my water bill). I pulled the lettuces and peas last week as they were either bolting or dried up. We had a great pea harvest this year so I didn’t feel too bad yanking them up though Stella was sniffing around for them. Spoiled dog.
I’ve been seeing a slow, steady drip of ripened tomatoes so far. Not enough to feel overwhelmed by them but enough to have a little snack every night. There are plenty of green ones though so I know it’ll be only a matter of days before we are in tomato overload. The green summer squash above is the second ripe one harvested and, like the tomatoes, I think we’ll be up to our eyeballs in them soon.My blueberry bushes are doing well for being transplanted this past spring. I get about a handful each night. I’m really glad I bought one more mature bush as most berries are coming from it now. And those green beans you see there are the first of the season! Last year, our green beans rocked, but I had some sort of critters attack the second round of planting this year so our harvest is cut in half.  I’m not horribly disappointing though as I’m still pulling frozen ones out of the fridge from last summer 🙂

We won’t be in town for the month of September so I don’t plan on planting anything else this year. I thought about doing some winter gardening, but I just don’t have the band width these days. I do have some maj, new design plans for next year though! Woot! Can’t wait!

What’s happening in your garden these days? Do you spend all of your evenings watering like I do? It’s getting borderline annoying…