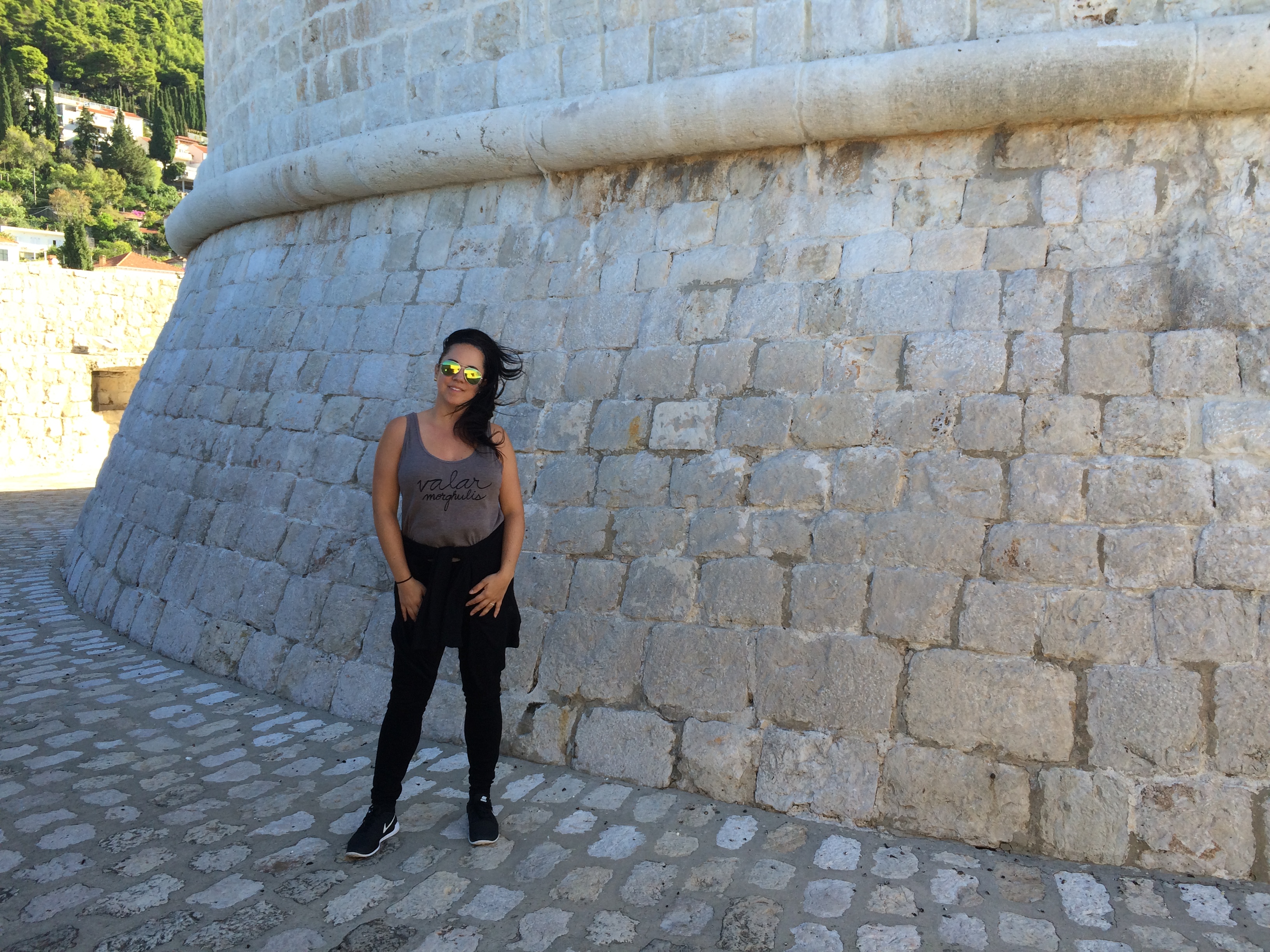 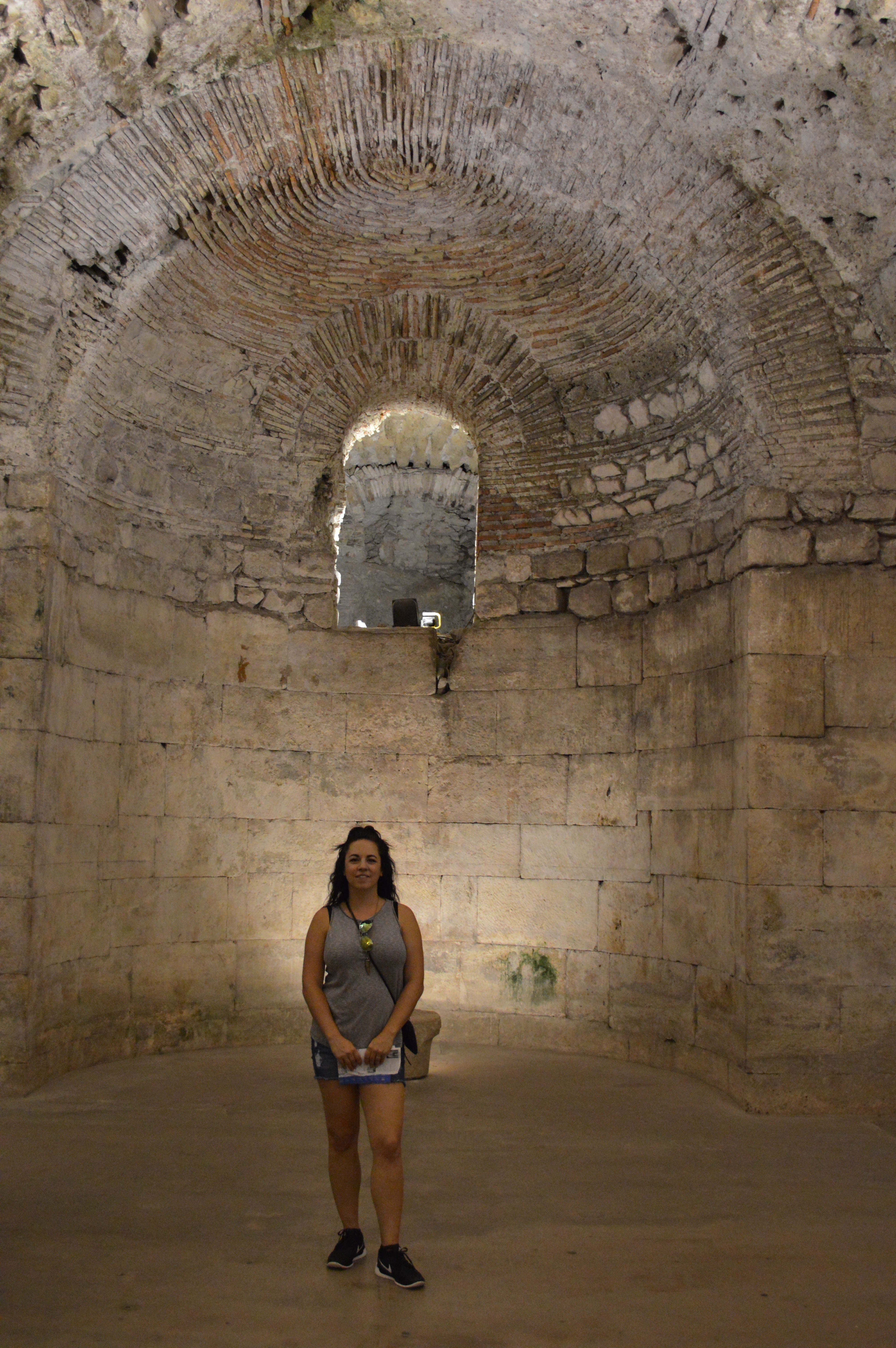 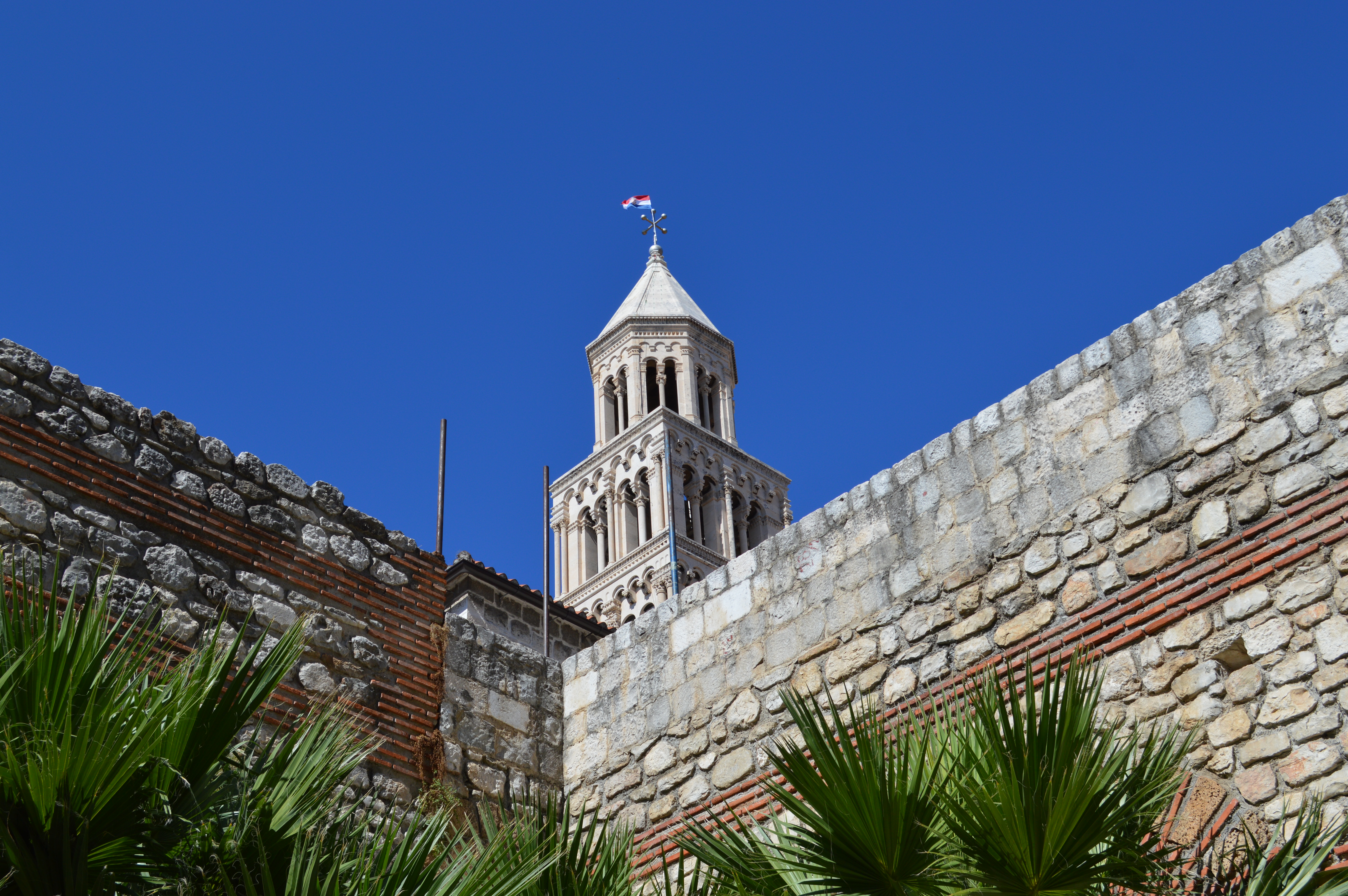 stayed: An air bnb a stone throw’s distance from Diocletian’s Palace and the ferry terminal. The road out front was a tad bit noisy but the place was super clean with a lovely view. Everything we needed to see was within walking distance and the host snagged us a free parking spot. Score. 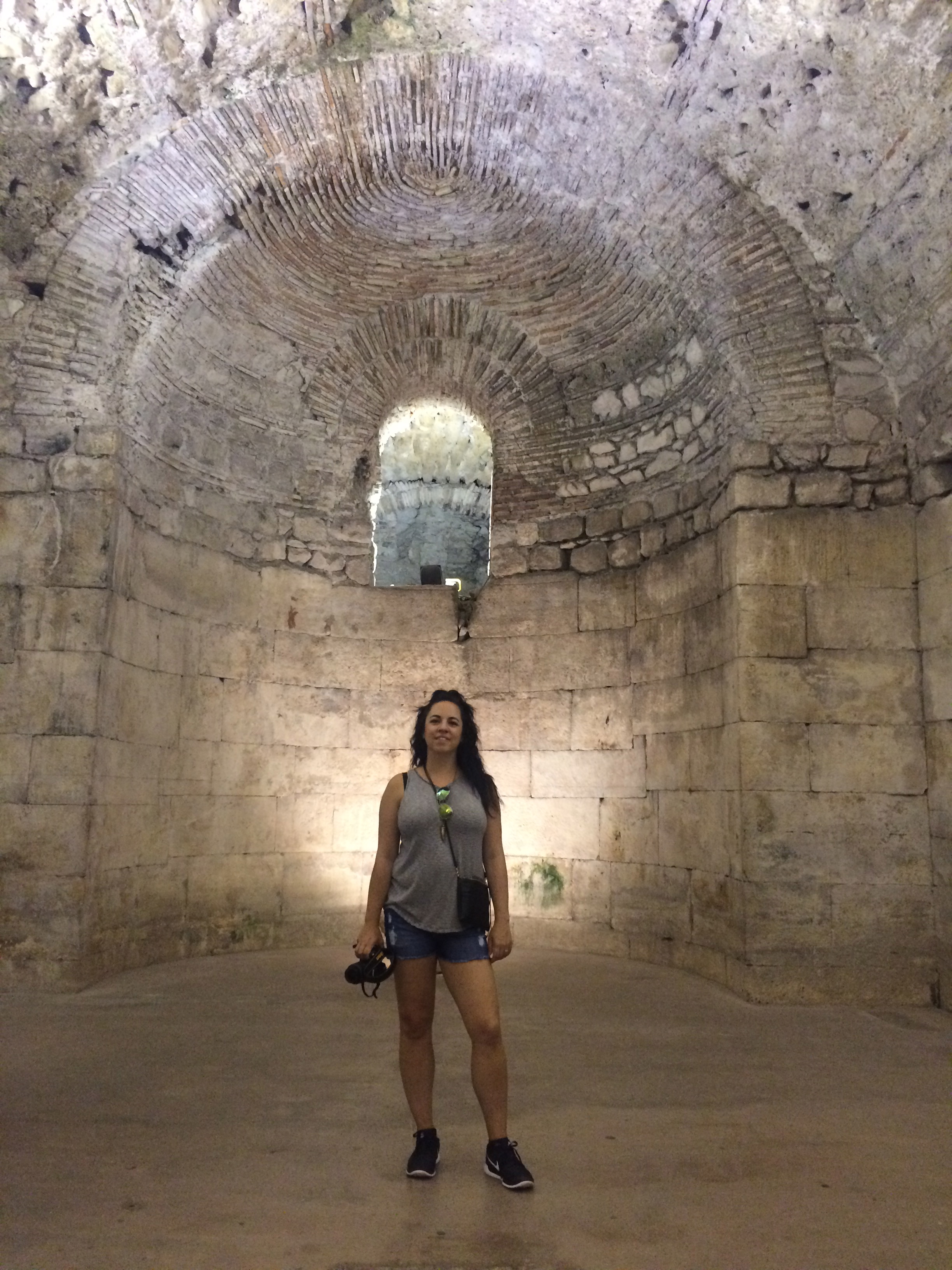 saw: Another Leslie version of the Rick Steves tour. I guess you COULD pay for a tour, but the palace was pretty straightforward to explore. We did pay to see the cellars of the palace, which were re-discovered in the 1950s. It had been a sewage tank and garbage dump from the Middle Ages on, so there was a lot to clean up but much to discover. They also shot some scenes from Game of Thrones in the cellars so you know this fan had to check it out. 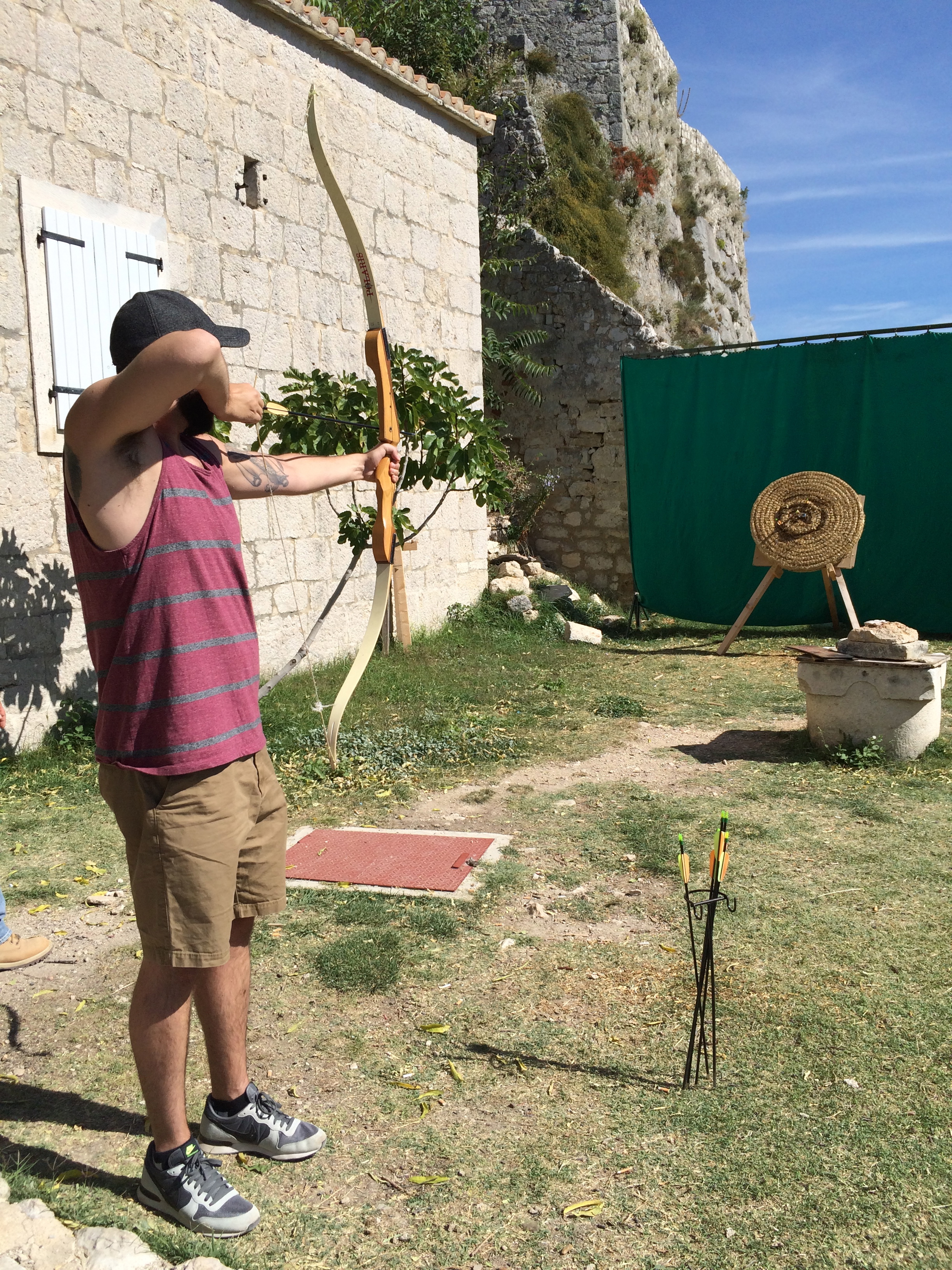 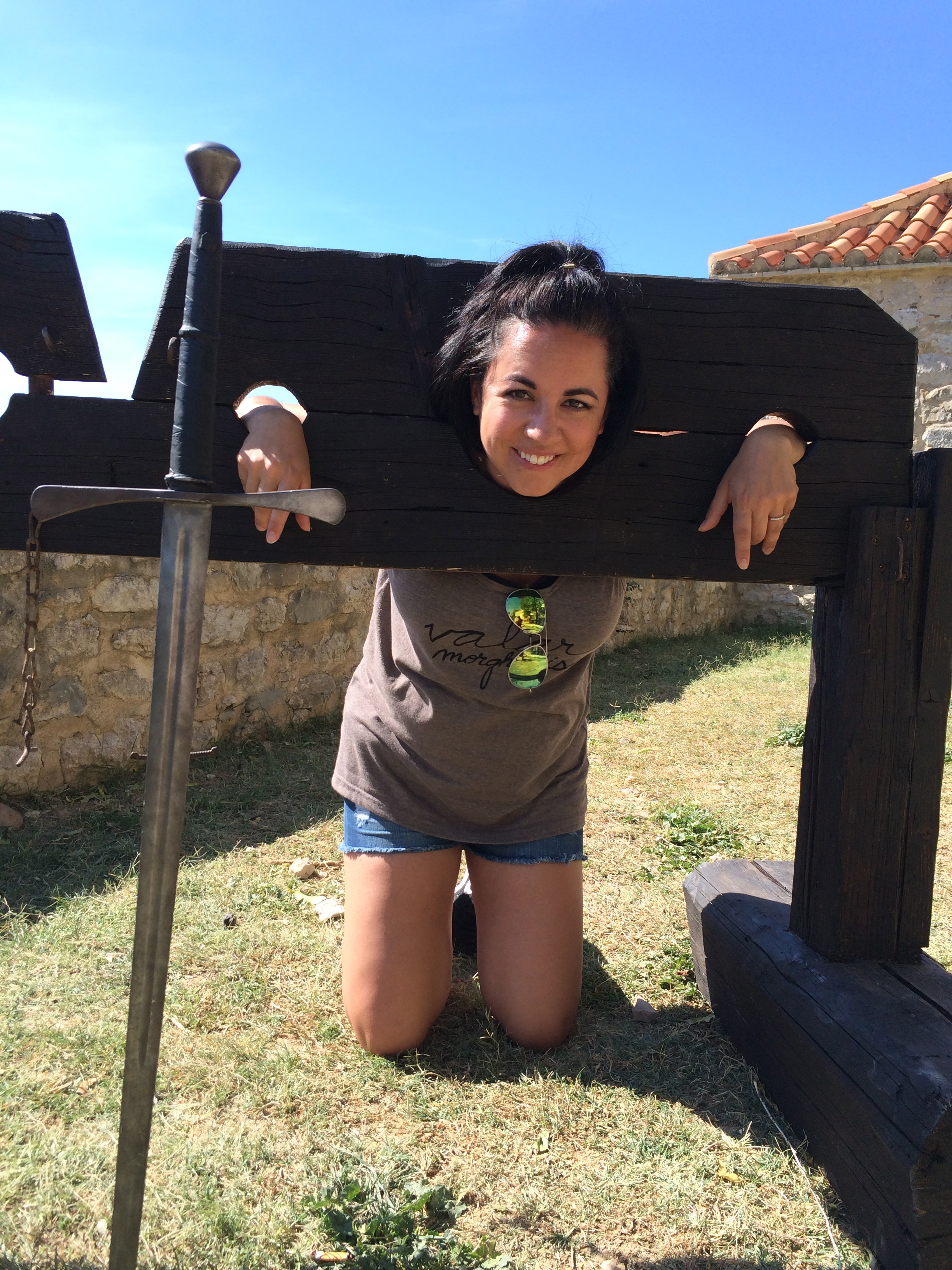 Klis Fortress. OK, if you are a serious Game of Thrones fan like moi, then this is another stop for you! The fortress is perched above Split and scenes from season four were filmed here. As we were exploring, we came across these two dudes sword fighting. They invited us over, let us take photos AND showed us how to use a bow and arrow. The look on my face says it all. HEAVEN.

A day-long private sailing trip. Granted, our captain was MAYBE 17 years old and spent a lot of time on his cell phone but he took us to this lovely cove. He also made us a delicious lunch and we swam and snorkeled the rest of the afternoon. I’ve never seen so many sea urchins in my life! We also had the surprise of a neighboring boat with a nude couple on board. How European! 🙂 Note to travelers – try the anchovies in Croatia. They are gooood! 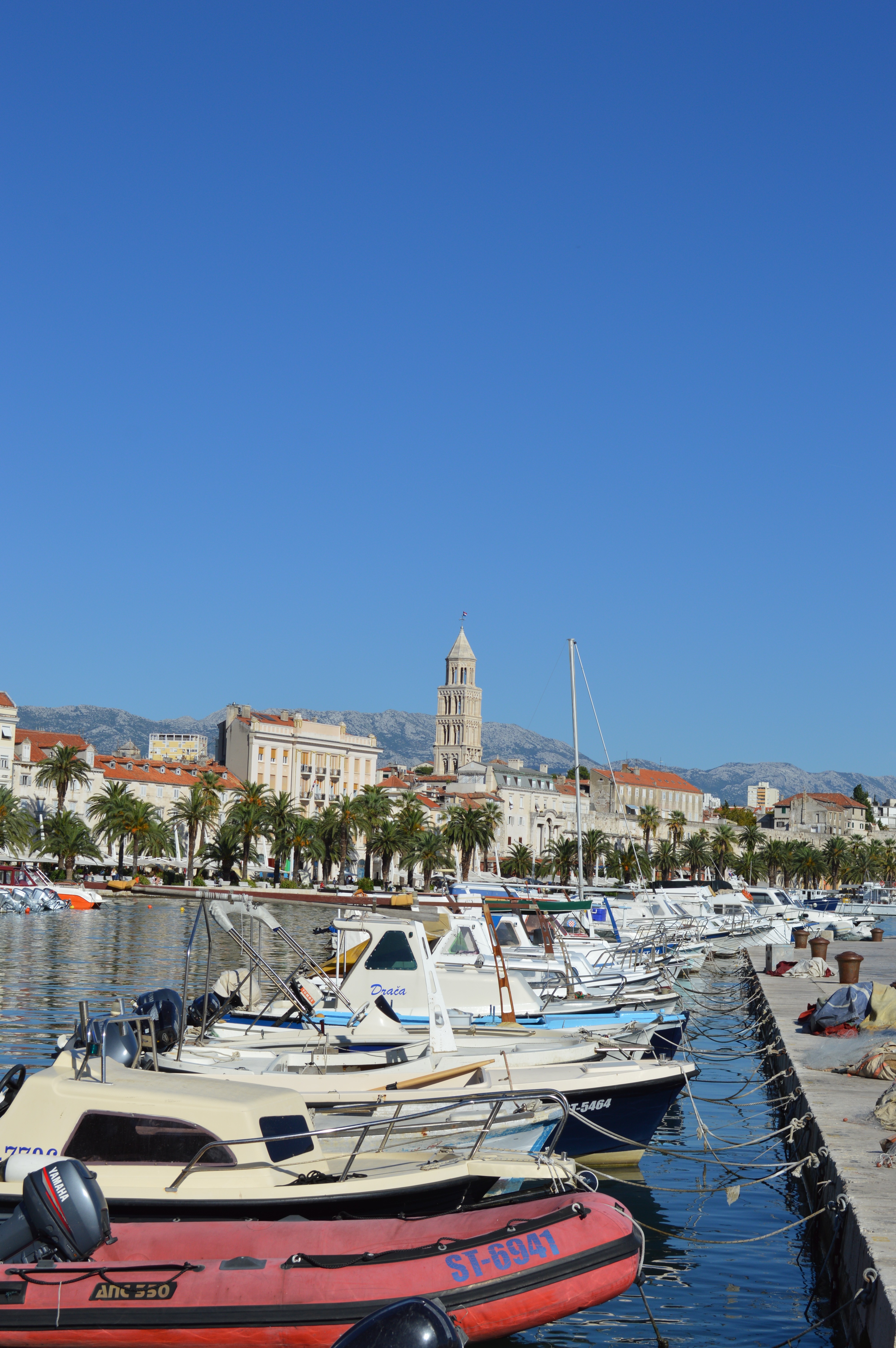 conquered: Walking on those slick white stones that seem to be everywhere in the palace. I’d hate to be there in a rain storm. It’d be ankle break city. 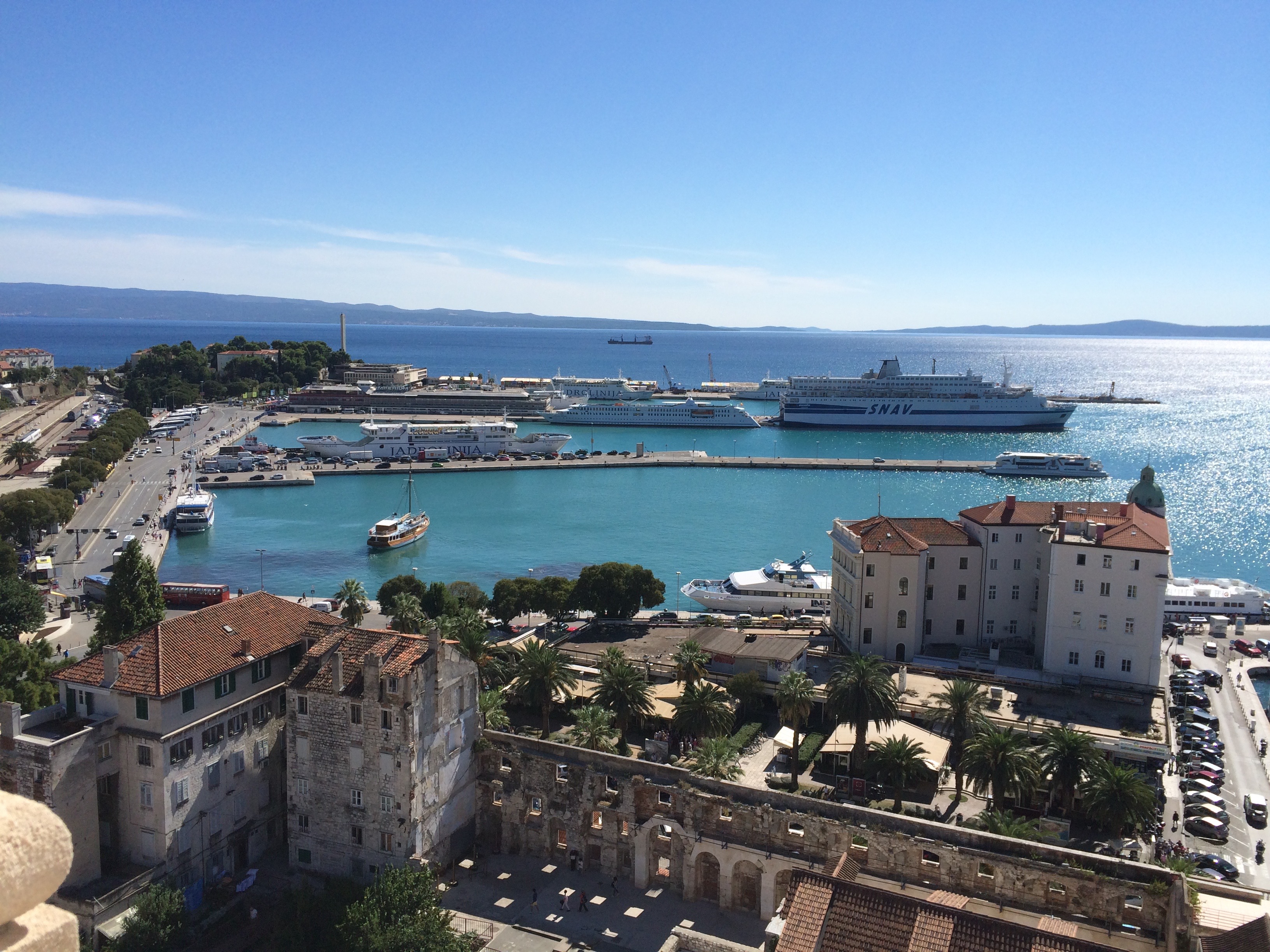 Adam conquered climbing to the top of the bell tower. Yours truly did not. My fear of heights is far too great and I was “that person” waiting at the bottom, desperately clinging to the railing. 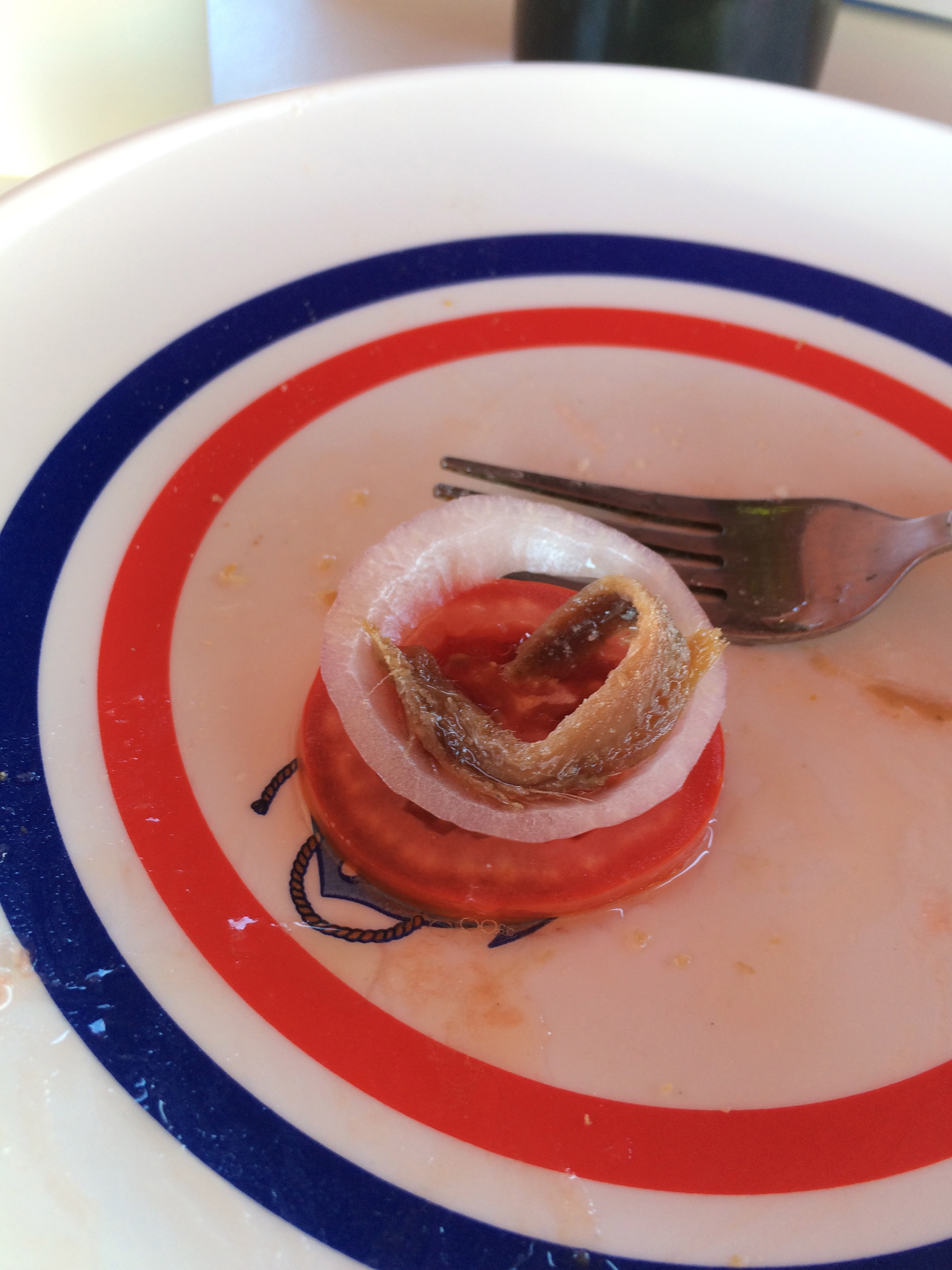 A little bit of relaxation! 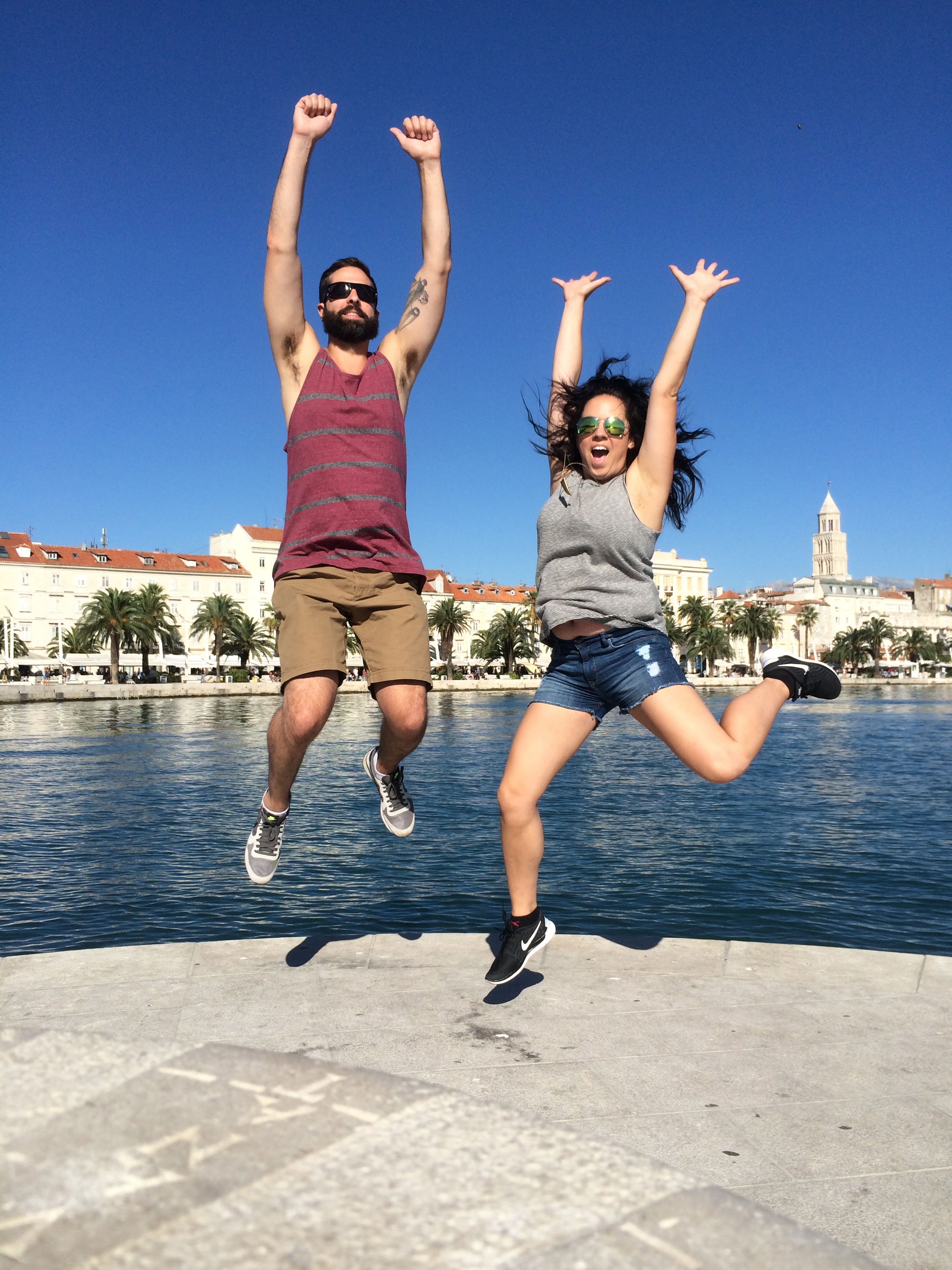 THE BEST action shot ever.

other travel notes: The food wasn’t my favorite here and we had some sticker shock when shopping around for dinner every night. I ordered a seafood risotto for lunch one day and it tasted like they used sea water to make it. Ick. This is where our “split a pizza” dinner started and we pretty much did that for the rest of our trip. Note to travelers – pretty much every place we went had their menus out front so you could check it out before committing. I liked ones that had lots of people dining since it meant it was probably decent. 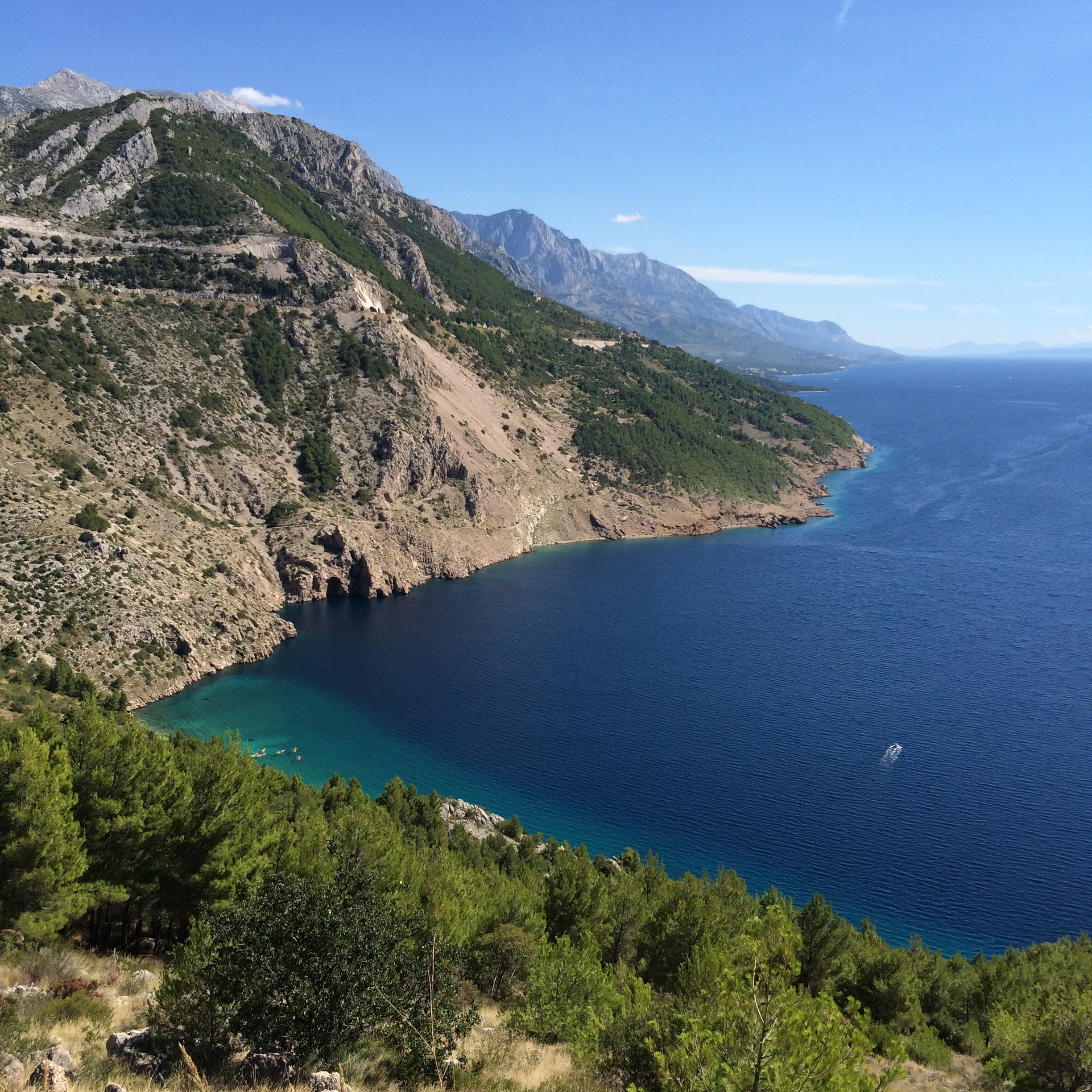 For some reason I didn’t realize that the Croatia coastline would be that rocky and mountainous. Towns were literally shoved on these steep cliffs right next to the ocean. That crazy coastline made for some fun driving too. I loved looking for a small line of cars on the side of the road, indicating that there was a little sunbathing beach below! A moment of calm before the storm that is the JFS Luncheon. I’ve been working my ass off these past few weeks and in just days, it’ll all be over with. 1,100 guests will have come and gone, money will have been raised (fingers crossed for a record breaking year), supplies will be tucked back away…..sigh. So much work for 75 VERY important minutes. Every second will be scrutinized, every detail triple checked and I’m on the hook for all of it. No pressure 🙂
I’ve been planning and managing events for 10 years now and I must say, this lunch is in a category of its own. It’s a beast ya’ll. An absolute BEAST. It chews you up and spits you out, then in a flash, it’s over. And you know what? There’s a bit of a depressing feeling once it’s done. You are no longer the ring master, the gal in charge. People aren’t asking you if you’re hanging in there or if you are sleeping at night. The focus shifts to other pressing issues and you fade back into the background until winter creeps back in and planning can begin again. Ok, enough self loathing. Bring on the ruckus!!!